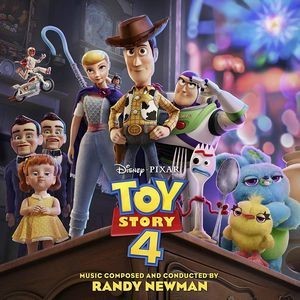 Back in the fall of 1995, Randy Newman was a 52-year-old veteran singer-songwriter, known more for songs that told stories, often sung as a character. He was also a multiple Oscar-nominated composer of grown-up scores for films like The Natural. But if you're of a certain age, you might only know Newman as "the Toy Story Guy."

"I mean, there's no competing with Toy Story, in terms of the reach of it," Newman says. "It inevitably appeals to, you know, hundreds of millions that I wouldn't appeal to."

At the piano in the small studio behind his Pacific Palisades home, Newman, now 75, remembers getting the call for the first Toy Story: "It started a terror in my stomach, you know, that it was so different from what I'd done."

Pamela Springsteen/Courtesy of the artist
At the time, Newman had never scored a children's film or an animated film before but Pixar wanted Newman partly because of his warm, Americana sound — they were worried the computer graphics might feel too cold without an orchestra — but also because of his bite.

"Pixar was almost the anti-Disney, that they didn't want to do musicals, or princess movies, or have magic and those types of things," Tom MacDougall, executive vice president of music at Walt Disney Studios, says. "I would say Randy is as important as Tom Hanks or Tim Allen ... If we didn't have his music in there, you would feel it, for sure. And you might not even want to make it without him."

Newman's score for Toy Story was all bouncing and scurrying because he felt it was only natural that when the toys moved, the music should move too. Newman wrote several unforgettable songs for Toy Story, but it was "You've Got A Friend" that earned him a spot in the Disney Song Hall of Fame.

As the film series evolved, the characters stopped to reflect more. In Toy Story 2, Newman wrote "When She Loved Me" for Sarah McLachlan—which went with a montage about losing the most important person in the world to you. In Toy Story 3, Woody and the gang suffered the heartbreak of losing their kid, Andy, to adulthood. Toy Story 4 presented Newman with ample opportunity to tug our hearts. When Woody confronts the loss of his very purpose in life, Newman was there to express some very adult emotions. "It's very adult sort of problem that Woody has," Newman says with a laugh.

Newman still remembers the first conversations he had with Pixar about these characters: "You have to take their feelings, their emotions, seriously. It's not like unimportant when somebody's feeling bad."

So, even though in 1995, Randy Newman may have seemed like an odd choice for a cartoon about a bunch of sentient toys, these movies have let him explore the full range of his humor and his heart. Maybe none more than this latest one. "I have a hunch that it might be the best one I did for Toy Story," he says.

Still, if Randy Newman is only remembered as "the Toy Story guy," he admits he wouldn't like it.

"I want them to know other movies, and that I write songs, you know. When I step off, I think it'll be the songs that are mentioned more. You know, when the obituary in the Courier Journal is there, I think it'll be 'singer-songwriter.' But I'm not sure. I'll never know."